My tattoo and it’s meaning 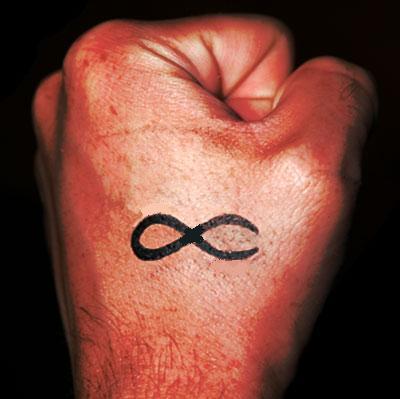 There are no words around the loops yet...

Countless times I’ve been asked what the tattoo on my hand represents. In preface to the response, let me say that I am a man who holds deep meanings as key to the definition of my character. I was never the type to think of getting a tattoo, but certain life events prompted me to brand myself with a symbol of multiple meanings to remind me of past mistakes and to stay optimistic.

Usually when someone asks I give one of two responses: “What do you think it means?”, or “It’s complicated”. That all depends on my mood and my interest in the other person. If I ask the former of the two, I gauge the rest of the conversation by their response. When I hear that it looks like a Cancer survivor ribbon, or a Bring the Troops Home ribbon, I generally lose interest. When they say it sort of looks like the symbol for infinite, but not quite, my interest is piqued and I know I can speak on a intellectual plane. I usually refrain from doing so because most people either can’t handle it, are turned off by it, or assume I’m overly uptight because I speak that way. It’s generally refreshing to find someone that I can speak to on such a level.

One of the funnier questions I’ve gotten about it was from a co-worker who asked if it meant I was part of some assassin’s guild or the like. I found that quite amusing.

Why did I want to get it?
Years ago I dated a girl that had many hidden problems. Nevermind what those were, but I can guarantee they were pretty severe. I knew I was heading toward disaster, but I didn’t care. Once while taking some of her things from another ex, I was having trouble pushing the Rubbermaid containers into the tiny trunk of my previous car, a 2005 Mustang (GT :D). So I pushed harder, and the box finally fit. In the process, I scraped up my hand on the deck of the car, leaving what would become two light spots on my hand after the scabs healed. When she left I was really hurt, and I would often look at the spots and immediately feel down. I had to do something, so I began to think of what I could cover these spots with.

At that moment was born the idea of the infinite loop, half closed. I first drew the design around the spots in pen, and hesitated to make the leap to a firm commitment by having it tattooed. Then, one day in a fit of spontaneity, I was driving home from my previous job at Detroit Public Schools and noticed a tattoo shop on Woodward. I stopped, signed some forms, and had the chance to back out when I was told it would be cash only. I didn’t have cash, so I walked to an ATM nearby.

When I came back, I paid $50 for the first real life-long commitment I’ve ever made. It took about 20 minutes and my mind sunk into the pain during the process. I remember watching people walk outside the tattoo parlor from a second story window, as the pain became a warm numbness and no more than a distraction.

What does it mean?

So that’s the background story. The meaning of the tattoo itself is three tiered.

2. Strength and Honor. I draw strength from my past, stand at a crossroads in my present, and will honor someone in my future.

3. The open loop. When (or if, it seems) I find “the one”, I will Honor her by closing the loop. Marriage is a sacred institution and one that I hope will be forever binding. Such thoughts held by men are ideals, and will not often come to pass. It would be nice, though.

So there you have it. The next time someone asks what my tattoo means, maybe I’ll just give them this URL instead of replying “it’s complicated”. Because it really is.

Now I know. I have to say, whether it matters to you or not, I have alot more respect for you. I, too, have 2 tattoos that I designed myself – that are symbols that represent complicated issues in my life; they somehow became part of me – and helped mold me into who I am.
FYI – I never for a moment thought it was a survivor ribbon or anything even remotely close to that.

hey, my name is annie…im searching for meaningful tattoos myself and i came across yours i knew it was similar to the infinity symbol but i was so curious about why it was unclosed because the whole prinipal behind it is never breaking. i love your explaination and i completely get hateing to explain…im getting a tattoo of a triquetra (google it) most see it as the symbol for the holy trinity but i am not religous, i believe it to mean that if the mind body and soul act in harmony anything is possible. and whoever close your second loop quite possibly the luckest woman alive…id love it if you wanted to email me, it would be nice talking to someone who gets it…ty for your time…xoxo <3Always
Annie

i love ur tat ive been looking around for something that has meaning to me and i ws just googleing and here i saw urs and saw ur meaning for it and its beautiful i really like it i just dont have that imagination to invent my own tattoo, lol i find it kind of difficult to tap into my brain that way i know wierd but ur meaning is wonderful and ur tattoo is too. and just so u know ima keep it in consideration for my next tattoo of symoblizim even though i too am thinkin about getting a Triquetra it has a beautiful message its something thats true that unfolds right before a womens eyes….but thanks alot see ya chao…lennie♥

Thank you for posting the image of your tattoo and the meaningful depth behind it. I like others found it while searching for inspiration for my own tattoo.

My impression of it’s meaning was along the lines of “nothing is infinate” i.e. “nothing lasts forever”

I was searching for a tattoo online, one thats on the webbing of the thumb and pointer finger of an infinity symbol. Yours was very close to what I was looking for and so I had to check out the link. Needless to say I read the entire story. I know what its like to have a reminder scar of a past love. Anyways, I’m pretty disappointed; I don’t want to feel like a copy and your story is much more intelligent and understandable than mine could ever be.

this means proportional to in physics

I found this at random when I was looking for ideas for my next tattoo. I have to say that it’s beautiful the way you discribed your tat. There are currently seven tattoos on me (planing another one soon) and all of them mean something to me. Mine might be easy to tell someone what they mean, but that doesn’t make any tattoo less special. Even if I never talk to someone who inspired one of my tattoos again, I still have the memory of the time that they spent in my life.
Thanks!

I was looking to a tattoo that had a meaning and i was always interested in getting the infinite sign on my ring finger so when I get married its a one time thing but i saw this one open and I had to see wut it meant it catched my eye i thought i was very interesting about the past present and future i like it..(:

this is awsome! I happen to have the infinitie sign branded on my inner wrist (done by yours truly)…… for myself the symbol was structured based off of existentialism. I had people in my life that were terrible for me, but I could do nothing of the situation. It was great reminder that….

1-existentially, nothing ever entirely dies, we are in fact made up of little particles that also happen to make up the world around us. its quite beautiful to think of the gift of life we have been given

2-what goes around comes around (literally, the symbol says it all) – stay positive because bad people can’t always be the ones planting ideas in my head, i have to take control for my actions and be held accountable

i have this tattoo, which i got with someone-who has eventually moved away from me.Till today i do not know the reason why.its painful and saddens me a lot.i never looked at the tattoo we had got till a long time.reading all the replies,i feel,there is a lot that life gives us and teaches us.we have to take it and move on. everyone has had pain, and it is the pain that makes us strong. i dont know if i am stronger- but i know i have survived one of the worst days in my life. somehow that thought makes me feel a lot happier. in pain we find ourselves.

Great point. I had the same thing happen to me a few years back, and even though it was painful at the time, things have improved to become even better than they were then. So even when things look like they’re at their worst, all is not lost, and will get better as long as you prepare yourself for that to happen; physically, mentally, and emotionally.

Copyright ©2021 sprinting on a tightrope. - "Consistency is the last refuge of the unimaginative."
Developed by WOWLayers.com